The name Arbatax, derives from Arabic and means fourteenth tower, the village was in fact developed around the Tower of Saint Michael, which is the fourteenth, stretching from the south, of a complex network of fortified towers built, from 1570, by the Spanish monarchy along the coast of Sardinia as a defence against Saracen invaders.
A village of fishermen, originating from the island of Ponza, it is a fascinating hamlet, destination for the ships which link the island to the continent and site of a tourist marina which offers important services to the yachtsmen who sail along the eastern coastline. To the north of Arbatax you can find the beach of Ponente, better known as La Capannina, a long stretch of sand adjacent to a pretty pine grove which, reaching from the docking area of Ponente, closes the lake of Tortoli, protected wetlands, where bustling fishing and breeding activities are carried out.
Within the heart of Arbatax, passing by the tourist marina, to the right, is the square which leads to the Red Rocks: majestic peaks of red porphyry which emerge from the crystal-clear waters and weave among rocks of black diorite. From here, it is possible to admire the red “Isle of Ogliastra” and watch the local youngsters diving spectacularly from the highest points of the rocks.
In the Red Rocks square, there is an annual international festival called Red Rock & Blues which has seen the participation of famous musicians such as David Bowie, Eric Clapton, Lou Reed, BB King, and Wilson Picket to name but a few…
Along the seafront, there is the church dedicated to the Blessed Virgin Stella Maris where, during the second week of July, a festival is held in honour of the patron saint. Stella Maris is a particularly popular religious festival which lasts from Friday to Sunday when the village comes to life and the seafront is transformed into a characteristic street market where it is possible to purchase and to taste local specialities. On Friday and Saturday evening the fishermen offer mussels, fried fish and wine to the participants of the festival. At sunset on Sunday, young locals dressed in traditional costume accompany the statue of the Madonna in a procession through the streets. Following this, there is a procession by sea: a boat transports the statue of the Madonna followed by a great procession of boats which do a tour of the harbour to the sound of fanfares. The festival comes to an end on Sunday night with a fireworks display in the harbour.
Passing by the church of Stella Maris and climbing the hills of the village, you will arrive at Cala Moresca overlooked by a square which offers breath-taking views. If you feel like facing the descent, and especially the climbing of the forty steps to the left side, you can enjoy a rocky cove with deep, beguiling waters. Starting off from the square and following the pathway which winds through the pine trees, it is possible to get to the top of the hill, from where you can admire the view of the entire plain of Tortolì.
There is also a splendid view to be seen from the promontory of Capo Bellavista, reached by following the road from the centre of Arbatax towards the lighthouse. The stretch of coastline south-west of Cala Moresca cannot be reached by land, only by sea up to the bay of Porto Frailis, a sandy inlet which opens up in the granite coastline, bordered to the left by the “Telis” peak and to the right by the hill upon which you can see the Spanish Tower of San Gemiliano. On the right-hand side of the bay, the rocks of San Gemiliano are perfect for those who is not wild about sand and looks for peace and quiet. They can be reached via the road which leads to the sixteenth-century Spanish Tower.
If you are not afraid of heights, via a steel ladder equipped with safety barriers, it is possible to climb to the top of the tower and admire the long beach in all its beauty stretching from the point of San Gemiliano to Lido di Orrì, an extension of alternating sandy beaches which indisputably form the most beautiful part of the shore. At all the beaches, the sand is extremely fine and the waters are shallow is crystal-clear.
Arbatax is a hamlet of Tortolì, the most densly populated centre along the coast, is at a distance of around four kilometres. It is the centre of the principal local commerce, an ideal place for an evening stroll and for shopping and is particularly lively during the summer season both along the tree-lined pavements which lead through Viale Monsignor Virgilio and to the historic Piazzetta Roma.

Ogliastra, a land of many contrasts, of a wild beauty which the hand of man has not managed to tarnish over the centuries, is like an immense natural whose mountainous walls reach right down to the sea with high cliffs designing enchanting inlets and long beaches of many colours.
Rich in minerals, such as basalt and quartz-lined red porphyry not found anywhere else in the world, the territory is covered by forests of ilex and chestnut, but it is certainly not rare to see yew, oak, alder, holly and thousand-year-old olive and juniper. Also the fauna is rich in animal species extinct elsewhere, such as bonelli’s eagle, lamb vulture, peregrine falcon, but also mouflon, fallow and red deer inhabit many of the mountain forests alongside other species of wildlife such as wolves, boars, Sardinian partridges and rabbits.
The seabed is home to a wide variety of fish such as grey mullet, gilthead bream, sea bass, grouper, dentex, mullet, shellfish and crustaceans. In the underwater caves which open into the limestone cliffs along the coast, until just a few years ago it was possible to sight the last examples of monk seals. The lake in Tortolì is an ideal habitat for the wading birds which stop off here during their migration.

The coast is an alternation of high cliffs, inlets, coves with tiny shells and beaches of the finest sand, which stretch from Cala Sisine to Santa Maria Navarrese, forming a really moving spectacle for those who are looking for an unparalleled tour via the sea.
To the south, the coastline becomes lower and frequently more sandy with rocks of red porphyry like those on the Capo di Bellavista and in the vicinity of the port of Arbatax.
The ever-clear waters of this part of the territory touches Calamoresca, Porto Frailis and the wide, white beach of Lido di Orrì which belongs to Tortoli’ and continues towards the marina of Barisardo and Loceri with the famous Stacks of the beach of Cea.
The western part is bordered by the beaches of Coccorocci and Tertenia. These parts of the coast can be reached both by land and by sea, and therefore it is also possible to use the various boats which depart every morning from Arbatax and Santa Maria Navarrese to drop the tourists off at the many coves.
They return in the afternoon to the departure points. Whilst, for lovers of trekking and nature, there is certainly an extremely pleasant way of reaching these coves via pathways which depart from the north of the SS. 125.

For the visitor who is fascinated by the winding, sometimes bumpy roads of the mainland which lead off from the SS 125 Orientale Sarda, there are breath-taking views of the stilettoes (isolated limestone towers), of the lonely highland plains of Golgo and Supramonte, of the spurs of Barbagie and Gennargentu which converge on Montarbu.
In this vast, uncontaminated and wild territory, you can find various archeological sites (domus de janas – home of the fairies – and tombe dei giganti – giants’ tombs) as well as the nuraghi, imposing constructions rich in history, fascination and mystery.
But there are also small, rural villages with churches, characterised by their architecture, which populate these areas. An intriguing visit of this region can be made on board the Trenino Verde (Green Train) of the Sardinian Railways which winds its way through the mountains, rich in woodlands and forests and enchanting scenery before descending once again towards the sea at the station of Arbatax.

The gastronomy of Arbatax is strongly linked to land dishes and tastes of the ocean. The traditional recipes, handed down over the centuries, are expertly offered in the numerous restaurants which can be found in close proximity to the Residence.
It is absolutely obligatory to try the seafood. Beginning with starters, excellence is achieved by the much-loved Bottarga di Arbatax, salted and dried mullet roe, served in slices with oil or butter, also ideal for adding flavour to pasta and the Ogliastran lobster. Also very tasty is the Crustacean and seafood broth, the Boiled octopus with potatoes, or the delicious Burrida, boiled ray seasoned with a sauce of oil, walnuts, vinegar and aromatic herbs.
With regards to first courses, the fish menu does not exclude Spaghetti with clams, lobster or the Fregola with winkles. “Fregula” is a traditional pasta, made by kneading the semolina with water until it is worked into little balls which are then toasted in the oven. As a second course you may choose from Fish broth, Omelette or Grilled Fish freshly fished from the Gulf and you will be sure not to make a mistake…
The land dishes are simple and essential, linked to the seasons. The meal traditionally opens with cured meats prepared according to ancient methods with the use of simple ingredients: salt, few spices and precise maturing in the mountains. Our area is particularly noted for the production of Hams, Sausages and Pig’s cheek.
Culurgionis is the most representative first course of Ogliastran cuisine. They are ravioli in the shape of a half-moon, closed with characteristic decoration with a filling of potato, sheep’s cheese, fried onions and fresh mint. Also traditional are the Maccaronis de ungra small pasta parcels handmade with flour, eggs and potatoes. Of the second courses, particular attention must go to Roast mutton, Lamb, Goat, and Pork, which is served on a bed of myrtle leaves giving a unique aroma to the meat.
The innards of the animal are also used: one of the specialities is Cordula which is prepared by roasting chopped liver, heart, spleen and lungs of the sheep, pushed onto the spit alternating with slices of lard and wrapping the entirety in the intestines. Also worth trying are the Favata, prepared with dried beans, cabbage, potatoes, pig’s trotters and head, dried tomatoes and wild fennel, and the so-called Peigeddus, lamb’s feet seasoned with a spicy sauce. From good sheep’s milk derive precious and unique cheeses typical of local production: Pecorino, Ricotta, “Casu ageru”.
There are many sweets: Amarettus, Pabassinas e Gatto’, are with almonds, or with cheese, such as the Pardulas or the unmissable Seada, a sheet of pastry filled with soft cheese and then fried and served hot with honey.
In Ogliastran cuisine there is also the traditional Pistoccu, a thin sheet of dry, crispy bread which can be kept for a long time and can also be tried splashed with water to soften it, or heated in the oven after coating it with oil and salt. Not to be overlooked is the aromatic and colourful wine Cannonau d’ Ogliastra. To digest all of this, it would be wise to finish the meal with a good drop of Filu e ferru Grappa, Mirto or Limoncello Liquor of Sardinia. 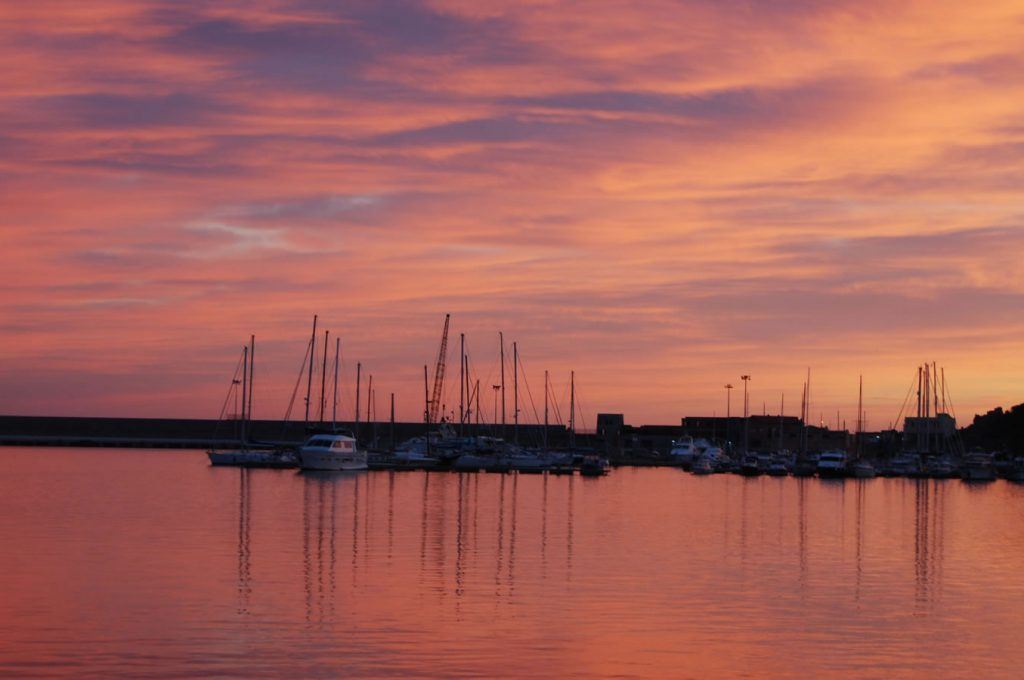 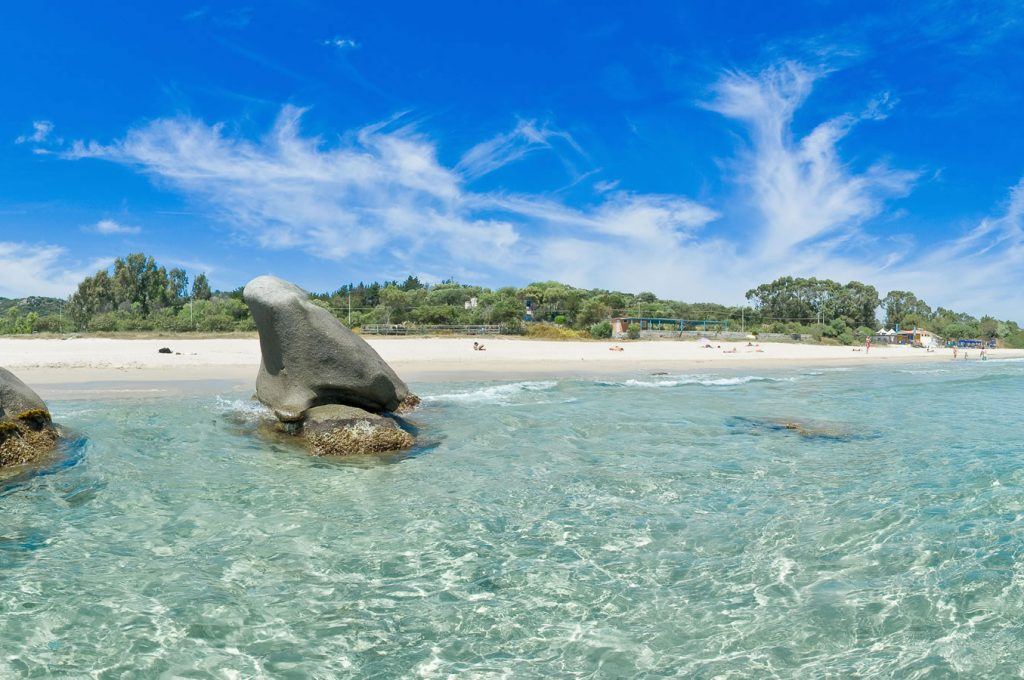 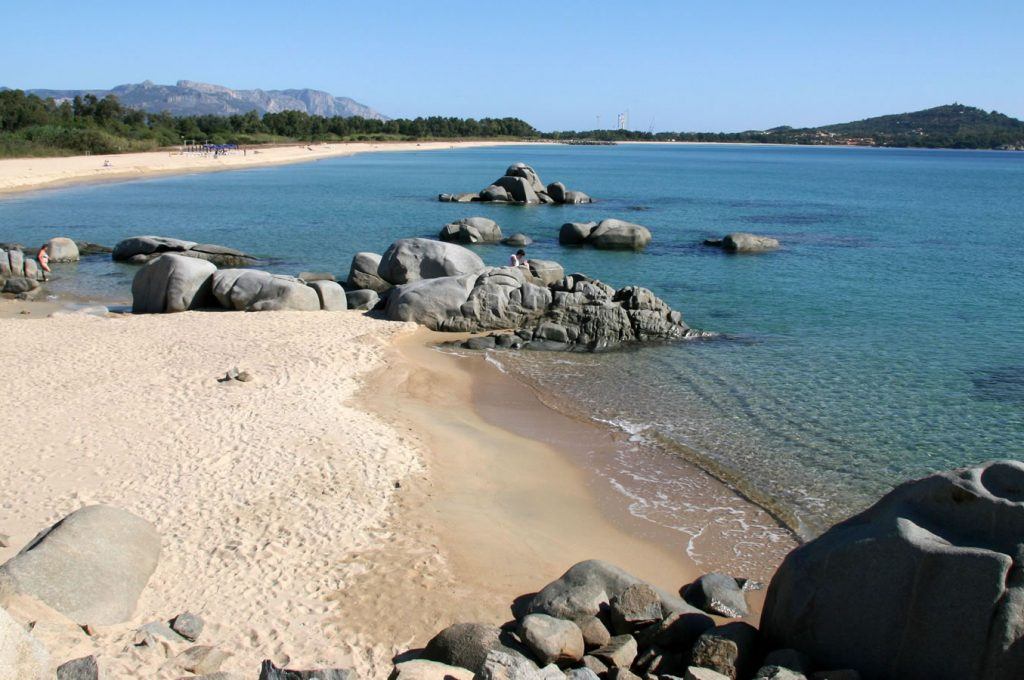 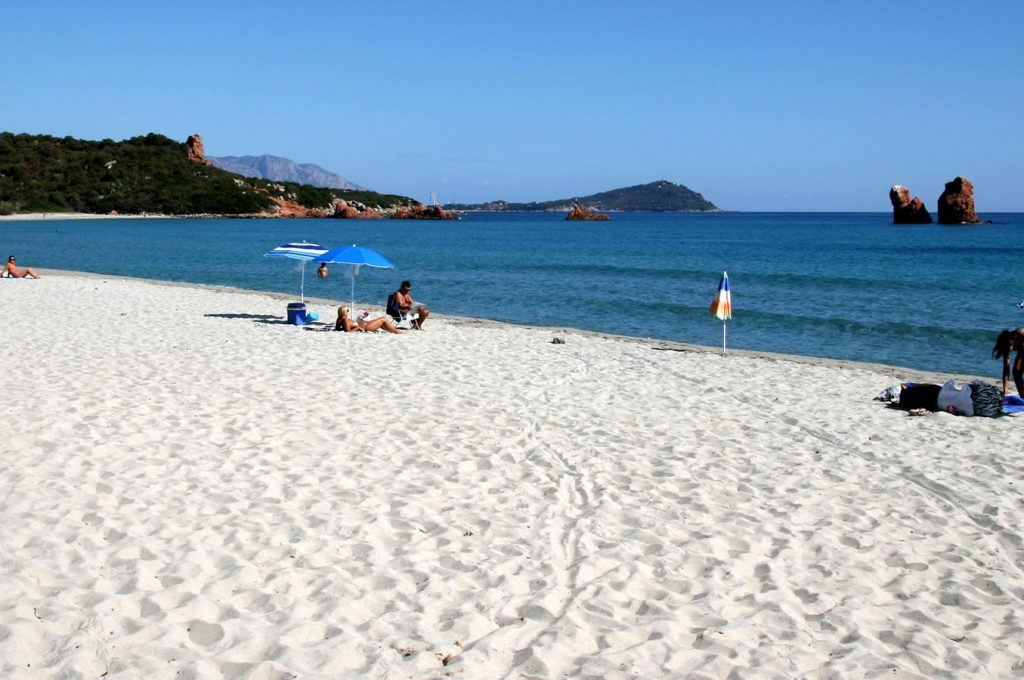